This past weekend at the Horse Park of New Jersey, the National Standardbred Horse Show took place to showcase the versatility of the breed. With horses ranging from under saddle pleasure horses, English show horses, Western horses, and of course driving classes, it had something for everyone. There were even divisions for “War Horses” for Standardbreds with over 100 starts or $200,000 in career earnings, as well as “Fresh Off the Track” for horses who have raced this calendar year.

We had the opportunity to follow Equiflexsleeve sponsored rider Dr. Jennifer Lowrey and her Standardbred, Striking Mystery, as they showed in classes under saddle as well as in the games division. Striking Mystery, known as Frosty around the barn, is a striking grey Standardbred that stands out from the crowd of common bays and blacks. At over 16 hands tall and 14 years old, he’s got a resume to rival his owners.

Striking Mystery stands out from the crowd of bays and blacks.

Dr. Jennifer Lowrey is, as you may have guessed from the “Dr.” in front of her name, an equine veterinarian, but it doesn’t stop there. She’s also an avid show competitor with several of her horses, included OTTBs, a warmblood, and stock horses in addition to her Standardbreds. On top of that, she is also an active licensed owner/driver/trainer with the United States Trotting Association and one of the few licensed active RUS riders in the US (where riders race Standardbreds at their race trot gait while riding them rather than driving in the race sulky). Knowing that Frosty had raced the Tuesday right before the show, we were excited to catch up with her to hear about her horse, the show, and her opinion of Equiflexsleeves. 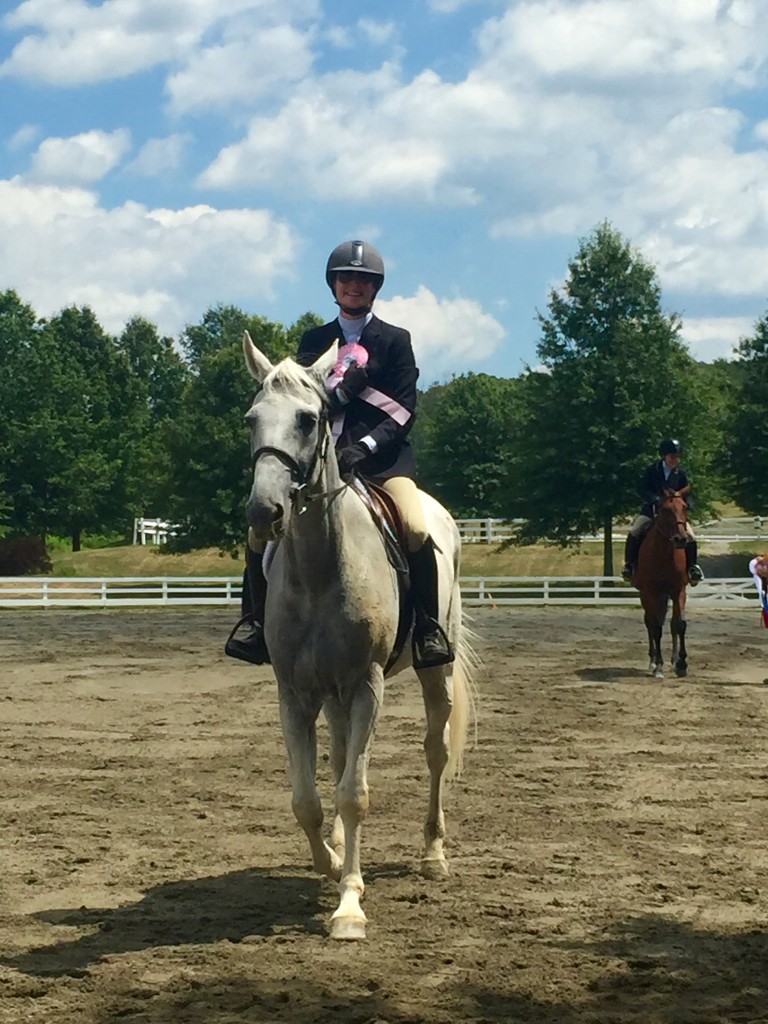 They took 5th in one of their English riding classes – impressive considering Frosty raced just days before showing!

After the show, Frosty got to enjoy a bath, a roll in his freshly bedded stall, and then the comfort of his Equiflexsleeves. He had the following day off while Jenn’s other horse showed, and then had the sleeves on to keep him from stocking up during the day in the stall after a long day showing the day prior, and they remained on for the trek home.

When asked how she liked the sleeves Dr. Lowrey said, “Equiflexsleeves did a beautiful job preventing Frosty from stocking up following the National Standardbred Horse Show and during our three hour ship home.” Not to mention how easy they were to put on – Dr. Lowrey was nice enough to let us video her with Frosty in the stall putting on the Equiflexsleeves to show how fast and easy they are to use. At just under 30 seconds a leg, that means you can have your horse done up after his classes in less than 5 minutes – much faster and easier with better, consistent support than any standing wrap can offer!

You can notice in the video the dots on Frosty’s hind legs – that’s from freeze firing, a common practice on the track with race horses (both standardbred and thoroughbred) and after retirement it’s not uncommon to see horses with these marks on their legs prone to stocking up due to poor circulation. We were thrilled to hear that Frosty’s legs were tight and comfortable following his long weekend thanks to help from Equiflexsleeves! 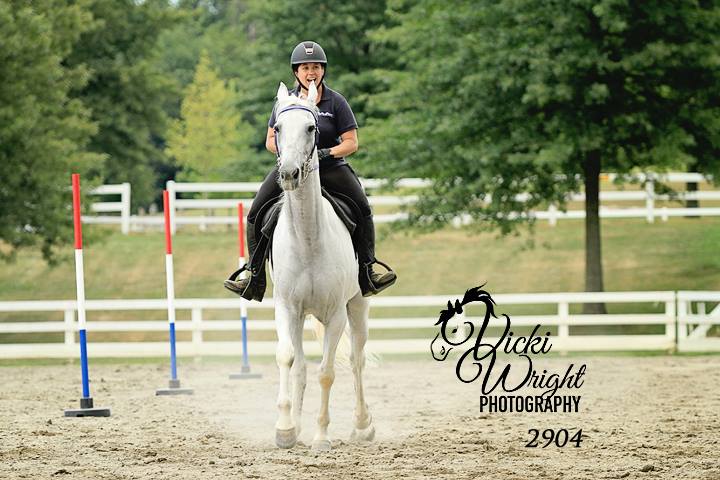 I was lucky enough to take Frosty for a spin in some of the games classes, while sporting my Equiflexsleeve polo. It was a great experience to show just how versatile this breed can be! Photo compliments of Vicki Wright.

Thanks Dr. Jenn for sharing your story and photos of Striking Mystery with us, and we wish you the best of luck on the track and in the show ring as Frosty gets ready for his next under saddle race next week!