Hi, Equiflexsleeve fans! This is Kim, the pony wrangler of the Equiflexsleeve team. I am SO excited about our Equiflexsleeves for Ponies line that I had to write out an ode to ponies – we all know them, we all love them, and most riders have a great pony story to share!

If you hang around a barn long enough, you’ll inevitably hear someone proclaim that “PONY” is a four letter word. The tiny equines get a bad rap for being tricksters, because they KNOW that they’re so cute that they can get away with nearly anything. Whether it be a kid covered in mud walking back with a cheeky shetland, a little girl sitting through sass from a small white welsh mare, or an adult rider turning out her paint horse after a bath to watch him cover himself in dirt by rolling not one, but THREE times – that first reaction of “Oh no you didn’t!” is quickly converted to “…but oh my goodness, how cute are you?” 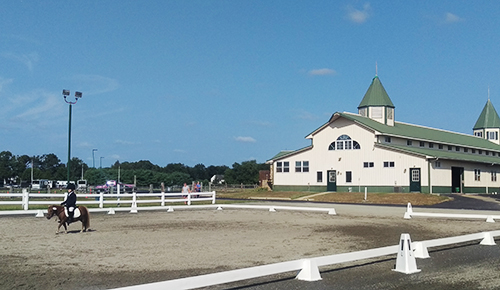 Can you spot the pony? Rolo and Lorelei at the tiny pony’s first show!

At my own barn, we have a solid staff of ponies for every level of rider, and as good as they are, they’ve all got their “pony attitude” reserves, ready to tap into their true pony soul whenever they feel the need.

The staple of our entire lesson program is Dory. She’s a 13 hand halflinger rescued from an auction lot about five years ago. She’s the world’s best pony – and I say that with confidence. Dory will tolerate anything – and I really mean ANYTHING – and do it all with her ears perked. She can teach anyone how to ride, she’ll play mounted games, she’ll go to shows or on trails, and everybody absolutely loves her. So… what’s the catch? Well, someone must have told her that she was, in fact, a pony – because every once in a while, when the work gets just a little too tough for Ms. Lazyhooves, she’ll happily trot or canter her kids right back up to the barn, as if to say “Lesson’s over!  Time for dinner.” 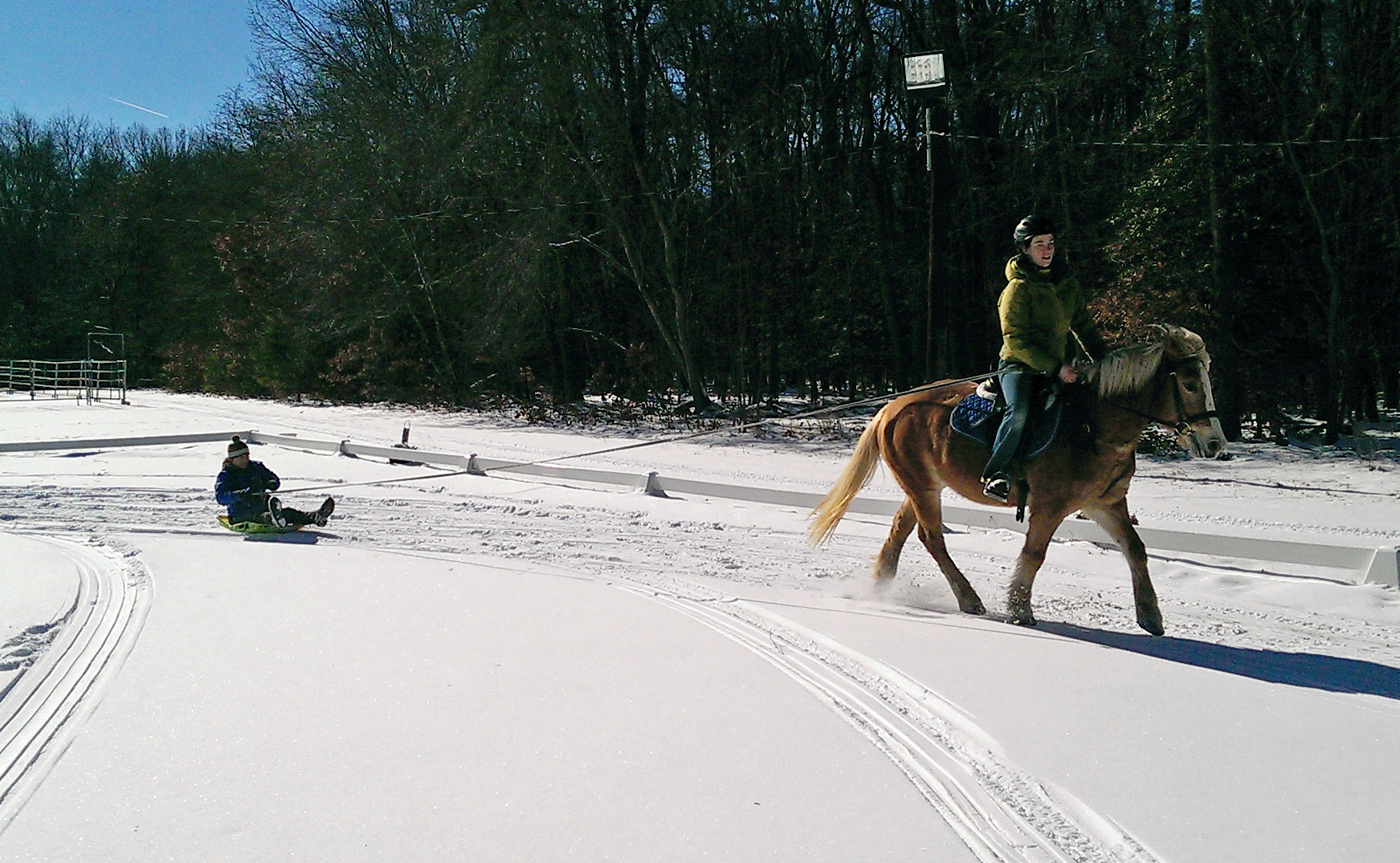 Dory, getting in touch with her draft horse roots.

Tater Tot is another barn favorite. He’s a 13 hand “mixed parts” pony – with tiny legs, a round belly, a short croup and a long head. What he lacks in, uh, style, he makes up for in every other way.  Tater is a big confidence builder for our riders, and he’s mostly good. Mostly.  Sometimes, after weeks of jumping crossrails, logs, and small verticals without an issue, he’ll decide that he just does. not. jump. Nope, not Tater. Not a jumping pony this week! Other times, he’ll be soaring over cross country jumps like he’s never had an issue. Oh, pony! 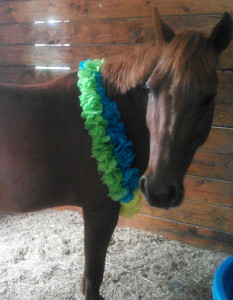 He may not love jumping, but he does love to party.

Our pony Rowdy is the cutest of the bunch, even though he earned his name by opening the trailer door on his way home. He was another killpen rescue who came to us because we were looking for a bigger Dory. Instead, we got a horse the exact same size as Dory, and rather than being the do-it-all pony that Dory is, Rowdy is a little, well, rowdy. We figured out that his canter was mostly a series of hops and poorly timed bucks while he tried to figure out how to put his legs in the right spot, and though he’s quite a handful some days, he’s got great brakes and will jump nearly anything you point him at. Even though he’s not an easy ride, he’s loved by many of our kids because he’s just so darn cute! 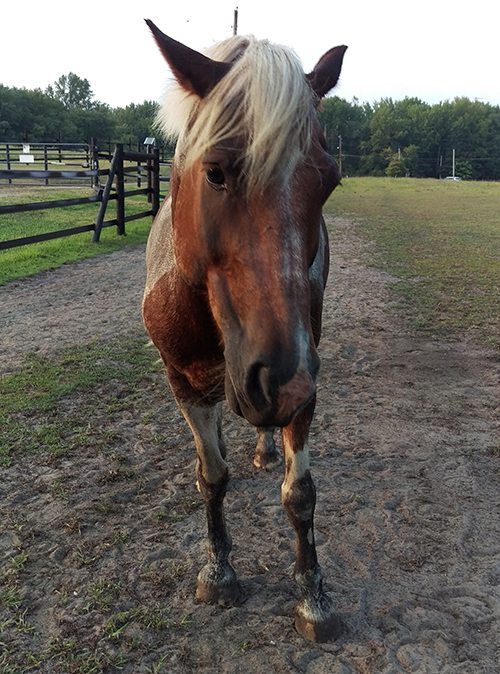 Plus, when a pony rolls so thoroughly that you can’t tell if it’s mud or boots on their legs… you’ve got to appreciate their dedication!

You know… maybe ponies get an unfair reputation for being bratty. Each of our ponies teaches our riders something different – Dory is our ‘posting machine’, Tater Tot keeps our intermediate riders on their toes, teaches them not to jump ahead, and the importance of riding straight and forward, and Rowdy teaches everybody how to have a sense of humor when you’re working with a green horse. As a smaller adult rider, I am a huge fan of the rise of sport ponies (and clumsy ponies!) in this country, because they’ve been showing off what us pony riders have known all along – that for what ponies lack in height they make up for in heart. Much like horses, there are a few bad apples, but overall my pony experience has been so pleasant. After all, while there always going to be some ponies that refuse jumps, there are others that make it to the top levels of eventing, show jumping and dressage. Every year, young riders work hard to qualify for the USEF Pony Finals, the most prestigious pony hunter, jumper and equitation test in the country. Pony Finals is a blast – so many tiny, neatly turned out children and ponies in a very professional environment – it’s a great stepping stone for young riders who want to rise up the ranks!

Sport ponies, lesson ponies, and backyard ponies all work just as hard as their larger equine counterparts, and they deserve the same care as horses do. However, pony wraps are notoriously hard to size. I have spent many hours wrapping, unwrapping, and rewrapping standing bandages and pillow wraps around small legs, only to give up, frustrated because either the pillow wrap was too large or the bandage had miles left, no matter how carefully I wrapped it! That’s why I am so happy with Equiflexsleeve’s pony sizes. No more juggling long wraps and small legs, and the peace of mind I have when I walk away from the stalls knowing that my ponies won’t stock up after a hard workout or at a show is the best part. Little legs deserve to be protected and supported just as well as big legs, and thanks to Equiflexsleeve, now it’s easy to care for those snarky little pony legs, too!

What’s your pony story? Do you have memories of learning to ride on a shaggy bay shetland, or have you competed around the country with your connemara cross? Share your story in the comments below, and you may be selected to be our next guest blogger, and win a pair of Equiflexsleeves for ponies! Need a pair now? You can order your own Equiflexsleeves for ponies online today.