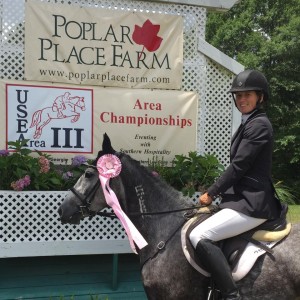 Elisa and Hwin at Poplar Place (Photo by Timothy Harfield)

Equiflexsleeve sponsored rider Elisa Wallace has been putting up great performances all summer, at Poplar Place, Great Meadows, Chattahoochee Hills, Millbrook and Richland Park!  One of Elisa’s magnificent mustangs, Hwin, took fifth place in the Novice Horse division at the Area 3 Championships at Poplar Place.  More recently, after putting in a personal best dressage score (45.4) with Simply Priceless at Richland Park, the pair finished 7th in the CIC*** division – what an accomplishment! Elisa’s newest addition to her performance horse string is Borneo Shady, who rocked the Richland preliminary course to finish second on a stunning dressage score of  27.5.  Of course, Elisa and her team are handling their long summer campaign like champions, and finding ways to have fun in between rides.

The biggest news out of the Wallace Eventing camp came last weekend, when Elisa and Simply Priceless traveled overseas to compete at Bleinheim in the UK in the CCI*** division.  We eagerly waited for news from the Wallace Eventing Facebook page and checked scores all weekend.

@WallaceEventing Ping! Elisa Wallace and Simply Priceless get some air over the Olympic Table! @BlenheimHorse pic.twitter.com/7Hrj7bSKQN

Elisa and Simply Priceless put in a very good dressage test to earn a score of 50.1 – good enough to put them in 30th place (out of a huge field of 111 competitors) to start their weekend.  You can watch Johnny’s dressage test on the Wallace Eventing YouTube channel.  The most fun part of any event, as well all know, is the cross country course and Bleinheim is no exception.  With tricky questions, massive fences, and the final jump being made of rubbish, the course at Bleinheim is one of the most challenging ones in Europe.  Still, Elisa Wallace and Simply Priceless jumped clear over the course in great style.  You can watch the helmet cam video and course video online, so if you missed it, be sure to watch their lovely ride.

The following day, Elisa and Johnny put in a great show jumping round with only one rail and no time on a very difficult course.  Out of 111 original entrants, Elisa and Simply Priceless finished in 29th place.  Way to go!  We are so proud to support Elisa (and her horses’ legs) as she solidifies herself as one of the top American eventers!  We can’t wait to see what the future holds for Wallace Eventing and Elisa’s string of horses.

In Case You Missed It – Selfie Toast and Buy Direct!